Much to Learn About Upper Abdominal Discomforts

If you get tummy aches from time to time, you are not alone. Stomach pain is estimated to affect at least 40% of the population and is a common reason for people to seek help from a doctor or pharmacist.

It may be comforting to know how common stomach pain is. However, there can be many different reasons it occurs and determining what’s causing yours can be a little tricky.1

Don’t worry, stomach pain isn’t usually caused by anything too serious. For about 5 out of 10 people, it is the result of an acidity problem, and the pain and other symptoms – such as bloating or nausea – are mild and can be managed quite easily.1

Read on to learn about the different types of stomach pain and some of the things you can do to put a stop to it.

Some types of stomach pain and discomfort are caused by a specific disorder or disease, such as a gastric ulcer or a food allergy, but for a lot of people this isn’t the case.1 Instead, the symptoms are triggered by eating and drinking habits, stress or medications.1

When there is a specific cause, the symptoms are usually more severe and persistent. If your symptoms are severe and you’ve had them for more than three or four weeks, please see your doctor to be checked thoroughly just to be sure.

To help understand stomach pain, it’s good to think of it in terms of where the problem occurs. 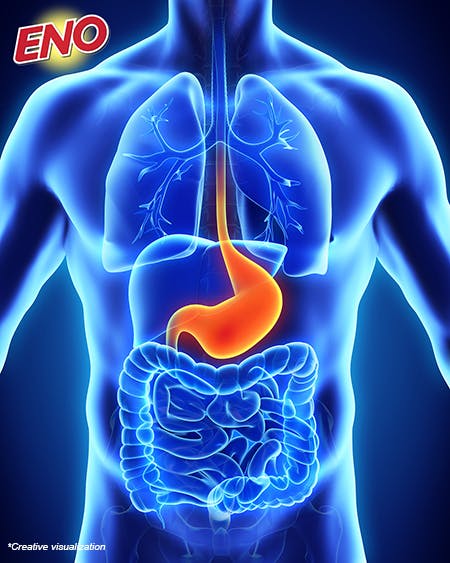 Pain in the region of the esophagus (the middle of the chest) is usually related to an acidity problem.1 If acid from the stomach leaks up into the esophagus, it can cause heartburn or reflux.1

Heartburn is an uncomfortable burning sensation in the centre of the chest, while reflux leaves a sour, bitter taste in the throat because stomach acid (and sometimes regurgitated food) has come right up to the throat or mouth.1,2

Please remember that chest pain can also be a symptom of a heart problem. If you have chest pain, especially if you also have shortness of breath or pain in the arm or jaw and a cold sweat, you should get medical help straight away.

‘Dyspepsia’ is the umbrella term used by doctors to describe pain or discomfort in the gastric (stomach) region. Dyspepsia can be caused by an ulcer, or you can have ‘non-ulcer dyspepsia’ (now often called ‘functional dyspepsia’), which may have no specific cause.

Around 10% to 15% of people with dyspepsia have some form of ulcer.1

An ulcer occurs when stomach acid erodes a section of the stomach lining.3

Normally acid doesn’t damage the stomach lining, but an infection with a type of bacteria called H. pylori makes it more susceptible to erosion.3 Some pain-relieving medicines may also make ulcers more likely.1,3

The symptoms of an ulcer can be quite severe – people often get a burning or gnawing pain, which can be bad enough to wake them at night. Often the pain is relieved by eating, but sometimes eating makes it worse.3

Ulcers can be serious, so if you think you might have an ulcer it’s best to see your doctor as soon as you can.

A large percentage stomach pain or discomfort (around 40%) falls under the term non-ulcer dyspepsia, because there is no underlying disease or disorder that causes it.1 Often the symptoms of non-ulcer dyspepsia are triggered by eating and drinking habits, stress or medications.1

With this type of dyspepsia, there tends to be other symptoms, such as bloating and nausea, as well as pain, and the severity and duration of symptoms can vary widely.1,2

The story of H. pylori and ulcers1

When scientists discovered in the 1980s that a type of bacteria called Helicobacter pylori (H. pylori) played a major role in ulcer disease, it revolutionised treatment. Before this, if ulcers ever healed, they almost always came back. Now, by eradicating H. pylori in ulcer patients, the number of recurrences has been dramatically reduced.

How to get relief from stomach pain

There’s no doubt that stomach pain can disrupt your everyday life, but there are some simple things you can do to help prevent it or get relief when it does happen.

These tips will be most effective if you know where and what sort of stomach pain you have.

If you have esophageal pain (heartburn and/or acid reflux), the goal is to try and reduce the amount of stomach acid getting up into your esophagus. Some changes to your diet and lifestyle can help with this, such as:

If none of these things help, your doctor can prescribe other medicines that reduce the amount of acid produced in your stomach.1,4

Tips for gastric and duodenal ulcers

If you have to wait a little while to get an appointment with your doctor, you can try taking an antacid to get some temporary relief.1 It’s also a good idea to make the same changes to your diet and lifestyle as the ones recommended for people with non-ulcer dyspepsia.1

Making some changes to your lifestyle is usually the best way to manage stomach pain when there isn’t an underlying cause.1 Here are some things that can help:

Where to find out more

There is certainly a lot to learn about stomach pain – we’ve covered most of the key points, but it’s always good to find out more.

There are some really interesting home remedies for indigestion that you can learn about here.

If you do decide to try an antacid, ENO may be a good option as it works fast and it’s convenient to use. You can learn more about ENO here.

Please remember to see your doctor if you have persistent or particularly severe symptoms, or if there’s anything you’re not sure about.